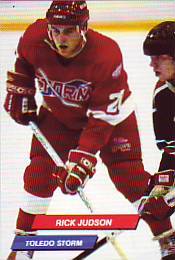 Rick Judson has been named the head coach for the 2002 Toledo Cherokee.

Rick Judson, a left winger who played 14 seasons of pro hockey, retired as the Toledo Storm’s all-time leader in games played (455), goals scored (197), and assists (244). Judson, a Lambertville native and Bedford High School graduate, made his pro debut in 1991. He helped lead Toledo to back-to-back Riley Cup titles in 1993 and 1994 and was named most valuable player of the 1993 Riley Cup playoffs. His best season came in 1993-94 with the Storm when he scored 39 goals and added 49 assists.

Judson later was an assistant coach with the Toledo Storm. He holds the franchise record in total points recorded with 441 which is 113 points more the next highest player. Rick most recently has coached with the Belle Tire Midget Major AAA 18U team.

Great addition to the team!! We look forward to working with you on building a great team

There are no comments for this announcement.